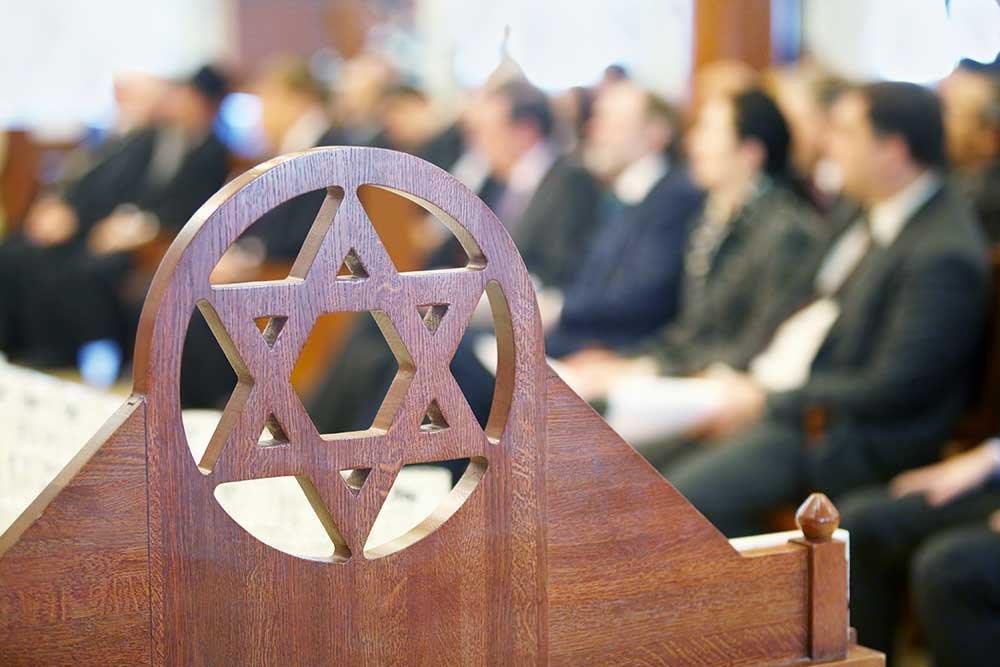 The Proper Etiquette for a Jewish Graveside Service

Within the Jewish tradition, unless the family chooses to make the interment private, it’s customary for mourners, friends and relatives to accompany the deceased to the burial site and assist with the interment. As a general rule, when the hearse arrives at the cemetery, it stops. Family members and friends will then carry or roll the coffin to the grave, and may intentionally stop on a periodic basis, as a show of grief. The rabbi customarily leads the procession to the burial site, reciting Psalm 91, assuring the deceased and all mourners of the presence and sheltering care of God.

In the Jewish faith, the cemetery has the same holiness as the sanctuary. Accordingly, idle conversation is generally inappropriate at a Jewish burial service, so you should plan to participate in prayers or otherwise remain silent. Your dress should be appropriate for a solemn occasion—work clothes, athletic attire and overly casual or flashy attire is frowned upon. Eating and drinking are also inappropriate in a cemetery. Be careful as you walk to the grave, as you want to avoid stepping over or sitting on a gravestone. There will typically be chairs that are properly positioned.

What You Can Expect at a Jewish Graveside Service

The graveside memorial may be immediately after the funeral or can be a standalone event. In fact, because of the Jewish custom of committing the body to the ground within 24 hours of death, it’s not unusual for the graveside service to take place before the funeral/memorial service. If you are unaccustomed to Jewish practices, you may be surprised to see that the casket is almost always a simple wooden box. That symbolizes two beliefs: that all are equal in death before the eyes of God, and that, in death, we are being returned to the dust from which we were created. The wooden casket facilitates the body’s return to the earth—in fact, metal caskets and metal objects (such as nails) are frowned on.

As a general rule, the graveside services tend to be brief, with prayers or readings and possibly a eulogy before the body is lowered into the ground. It’s customary in the Jewish tradition, but not required, for the mourners to shovel dirt into the grave after the casket has been lowered.

Once the body is lowered, it’s traditional for the justification of the divine decree, or tzidduk hadin, to be read. Mourners will then recite the burial Kaddish, which references the time when God will give new life to the dead, reconstruct the city of Jerusalem (including the temple), and establish his new kingdom on earth. Those friends attending the interment will then form two parallel lines along which family members will pass and accept condolences as they return to the hearse. The parallel lines also symbolize to mourners that they are supported in their grief. As the mourners pass between the parallel lines, it’s customary for those assembled to say “May God comfort you together with all the mourners of Zion and Jerusalem.”

As a general rule, you won’t see flowers placed on plots in a Jewish cemetery, or as part of a Jewish funeral or graveside service. Instead, it’s customary for Jewish mourners to place stones on a grave. Tradition holds that stones will weigh the deceased’s soul down, so that it does not try to return among the living, and preventing demons and golems from entering the grave. In addition, the permanency of the stones helps keep memory of the deceased alive.

Most men attending a graveside service will wear a dark yarmulke. One is often available if you don’t bring or wear one yourself.

Upon leaving the cemetery after an interment, it’s customary for everyone to wash their hands. This signifies that mourners are leaving death and impurity behind them and entering back into the world of the living.

Providing Comfort and Support in Your Time of Loss

At Gutterman’s, we have provided compassionate and comprehensive funeral services to individuals and families in New York and Florida for more than 100 years. When you have questions or concerns after the death of a loved one, or need guidance with funeral or memorial services, call our offices at one of the numbers provided below. We are available 24 hours a day, 7 days a week to assist you.