The Traditions of Purim 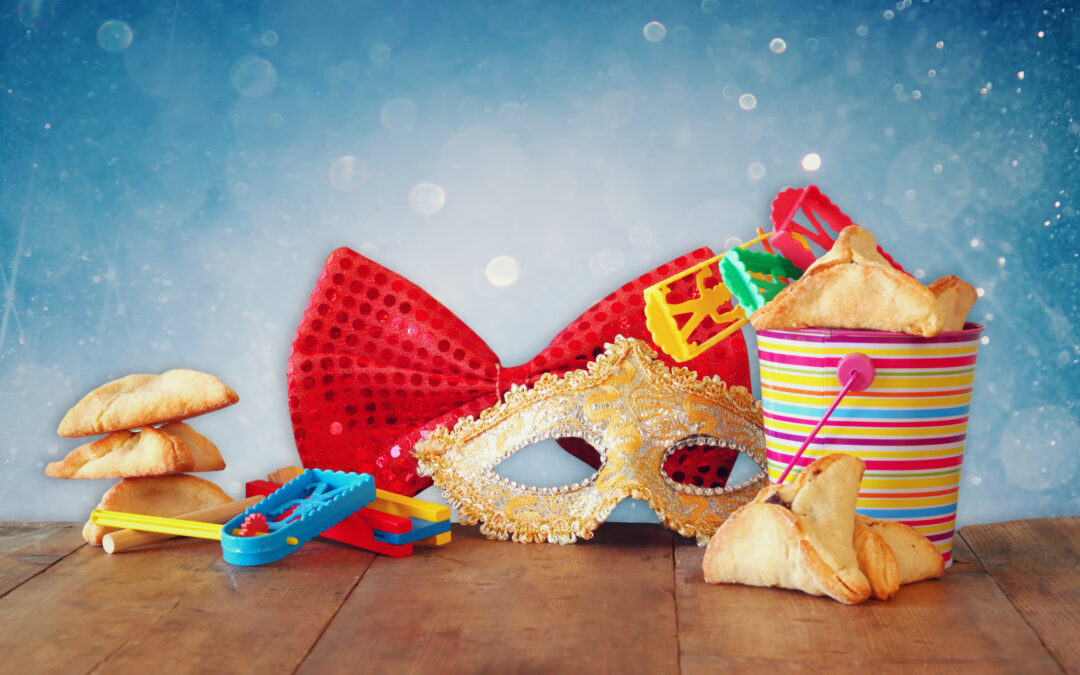 From sunset on Thursday, February 25, 2021 until nightfall the following day, Jewish people around the globe will celebrate Purim, the “Festival (of Feast) of Lots,” perhaps the most joyous of all Jewish holidays. It’s a celebration of family and community, with parades, costumes and masks, the exchange of “Purim baskets,” reenactments of the “Purim story,” and a festive meal.

What Are the Origins of Purim?

Purim commemorates the saving of the Jewish community in Persia, believed to have taken place in the 5th century BC. According to the book of Esther, Mordecai (the cousin of Esther and a member of the Jewish community) discovers and foils a plot to kill the king. Though his deeds are recorded in the daily record of the court, the king does not learn of Mordecai’s actions in saving his life.

Later, Haman (viceroy to King Ahasuerus) formulates a plan to kill everyone in the Jewish community, in retribution for the refusal by Mordecai to bow down to him. Haman seeks and obtains permission from the king to fulfill this plan and then casts lots to determine the exact date the slaughter will occur. Upon learning of the plot to kill all members of the Jewish community, Mordecai (himself a Jew) appeals to Esther, asking her to intercede with the king to prevent the slaughter (she has been taken as a wife by the king).  She advises the king that she is Jewish and of Haman’s plan to exterminate her, along with all other members of the Jewish community. Haman is hanged and the king allows Mordecai and others to pre-emptively slay those who seek to kill them.

How Is Purim Celebrated?

Purim is considered less a religious observance than a celebration of the Jewish nation in the world. Among the traditions followed around the world are:

Gutterman’s—Serving the Jewish Communities in New York and Florida

At Gutterman’s, we bring more than 125 years of experience to individuals and families in New York and Florida, handling all matters related to funeral and burial services for members of the Jewish faith. We have a comprehensive knowledge of Jewish practices, and can advise and assist you with every detail, from the order of a memorial service to the choice of a monument, from the selection of a casket to sitting Shiva or creating a Yahrzeit calendar. We can help you pre-plan your funeral in New York or Florida, and can even assist you with the preparation of an obituary.

While we believe that the pandemic poses a serious health risk to our customers and our staff, we also recognize the importance of grieving, and the integral role of a funeral and burial in Jewish tradition. We strictly adhere to all guidelines recommended by state and federal public health safety officials and are committed to doing our part to minimize the spread of COVID-19. We will work closely with you to determine ways to honor Jewish customs, pay respect to the deceased, and keep everyone safe. To see a statement of the safety measures for all our chapels, visit our website.

To learn how we can be of service after the death of a loved one, contact us online or call us at one of the numbers listed below. During the pandemic, we are available by phone, text message or videoconferencing. We will take your call 24 hours a day, 7 days a week.